A hunger in rural America 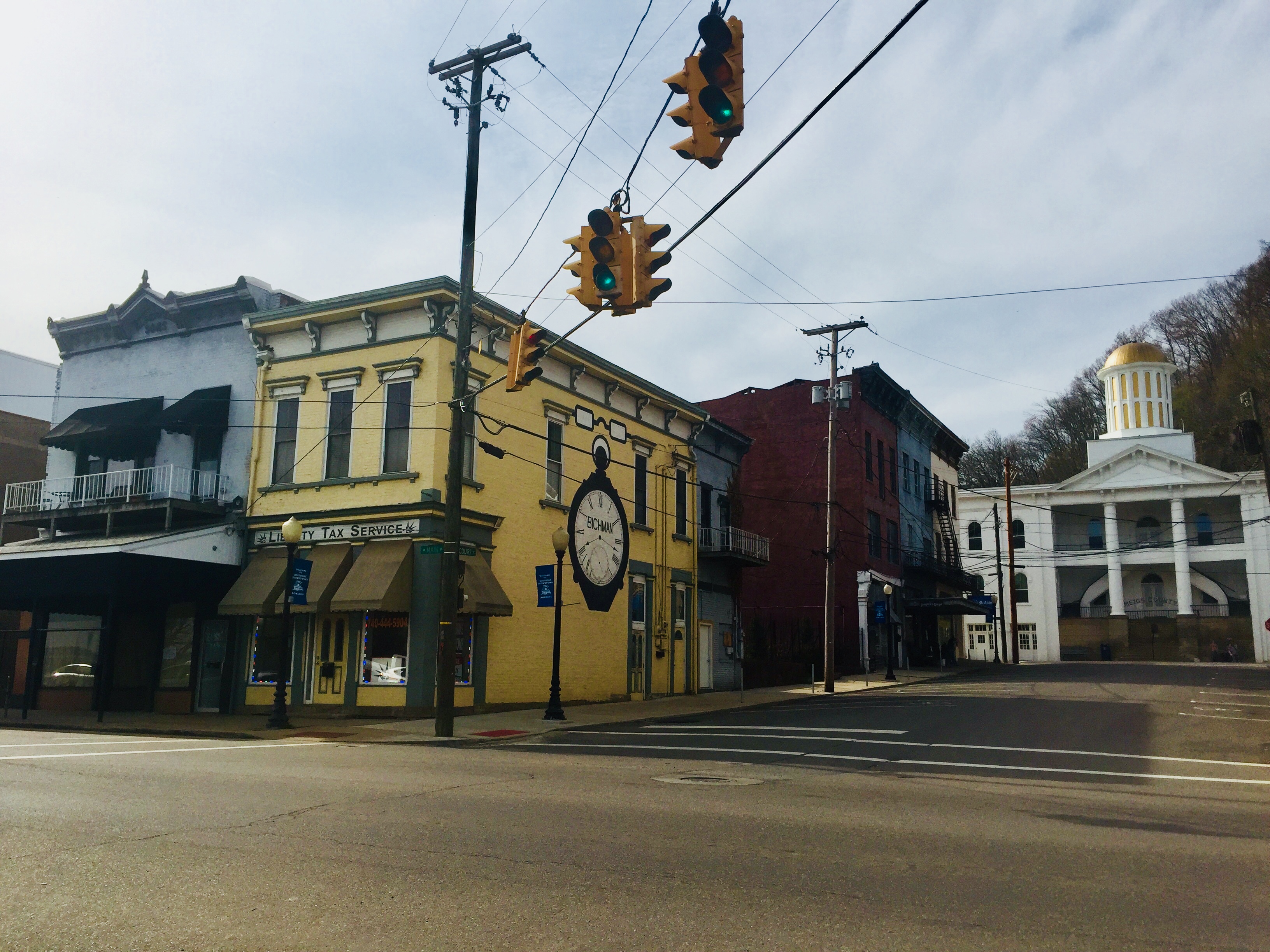 POMEROY, Ohio_“You gonna jump in the water?” asks Max Drener standing one spring Sunday near the Ohio River, the stub of a cigar in his mouth.

A lifelong resident of this southern Ohio town, he’d been checking out the water level from a bank-side parking lot where the mud and sticks of a recent flood still stuck. Max says the river fills with swimmers in the summer, pointing to cement steps, now submerged, where boats pull up to dock.

He wants to know where I’m from and what I’m doing. Reporting, I say, on towns like these. Towns many people called depressed, dying.

His wife runs Weaving Stitches, a massive antique shop on the main strip that was once an inn and then later a department store. At five stories, it’s the biggest building on the block. The KKK used to meet in secret on the second floor, Max says.

Like many of the older folks I’ve met, he dislikes craft beer, the rise of big box commerce and the poor work ethic among youth. He blames much of the world’s current troubles on Millennials.

But Pomeroy doesn’t feel like it’s dying. People pack the local craft brewery on a Friday for pints of Meigs County Gold and an acoustic guitar set. The McDonald’s buzzes and the library too, both major hotspots for Internet access.

Just down the road in Middlesport buildings remain shuttered, falling into disrepair. I drive past a shirtless man carrying a case of Busch beer down the street at 4pm and a police officer searching the car of another stopped near the Dairy Queen. Compared to Middleport, Pomeroy isn’t looking bad.

A young couple from West Virginia is restoring an old shopfront on Main Street and plans to open a cafe. They’ll be roasting their own coffee beans. Originally from Cleveland, Maureen Burns, owns a tea company and is opening an apothecary with plans to start teaching courses on herbalism. She’ll offer yoga and herbal treatments using sage, garlic, elderberry and more from her garden.

The town has taken notice. As work began on the building she’s restoring, people would stop to ask what she planned for the relic. “They were so happy we were saving it,” she says.

The past year has not gone according to plan. Maureen, known affectionately as Mo, says she’s considered giving up the business. But the friends she has made in the village have also urged her to keep going.

“This region, I didn’t know the wealth as far as … just the understanding and the humor and the tenacity,” she says.

She has seen people grow discouraged. Those who never felt the prosperity here have a hard time envisioning its promise, she believes.

Larry Hess, who is opening the coffee shop with his wife Candice, can attest to the lack of vision. “People think we’re crazy,” he says.

One life-long resident I speak to weeks later brushes off any optimism new entries like this might bring to the town’s prosperity. Stores always come and go, he says.

But people like Maureen and Larry do seem to bring a sense of enthusiasm to the village. They say they want to introduce hope to a place they can see is hurting. Outsiders are working to do the same in small townships around the region, finding promise in unexpected places.

In Glouster, further north, Jane Cavarozzi has been trying to draw in businesses and is seeking investment to rehabilitate some of Main Street’s historic buildings. She envisions a maker’s space and a test kitchen to train restaurant staff. The town needs places where passerby will stop for a coffee or some locally-made nicknacks. It needs facilities that generate jobs and draw in youth with the vision and energy to give Glouster some vibrancy.

Mayor Miles Wolf says he fully supports the effort. He also touts his own record bringing the town back from years of debt. The problem, they all say, is money. No one wants to invest in a place with no hope, says Wolf. City council members don’t want to go looking for grants or loans.

Jane sees no point in waiting. She decided recently that Glouster could use a regular community gathering, so she sent out an email promoting a monthly event with food trucks, local art and music. Two weeks later the first one took place.

Similar events happen down in Pomeroy throughout the summer.

Over and over again on my visits to towns around southeast Ohio I hear there is no silver bullet to reviving them. What does a city need to succeed? Atlantic reporter James Fallows, whose latest book has been getting attention, has a checklist (it includes craft breweries).

Were I to create a list of distinguishing traits common to the towns I’ve visited, it would include dollar stores, funeral homes and libraries. A strong sense of nostalgia among life-long residents and a trivia-like knowledge of the town’s past are also often evident. In Perry County several older residents have come together to create historical museums and pour through county archives.

The past may not entice new residents, but towns with strong arts and culture foundations do seem to spark innovation needed to keep and draw in a younger generation.

For new businesses to survive and grow they also need the Internet, so they can reach beyond the community.

What is evident everywhere I’ve been lately is that people, new and old, speak with pride about the places they’re living. Much of America may be in dire straits. But there are also plenty of places that are hungry for something better.