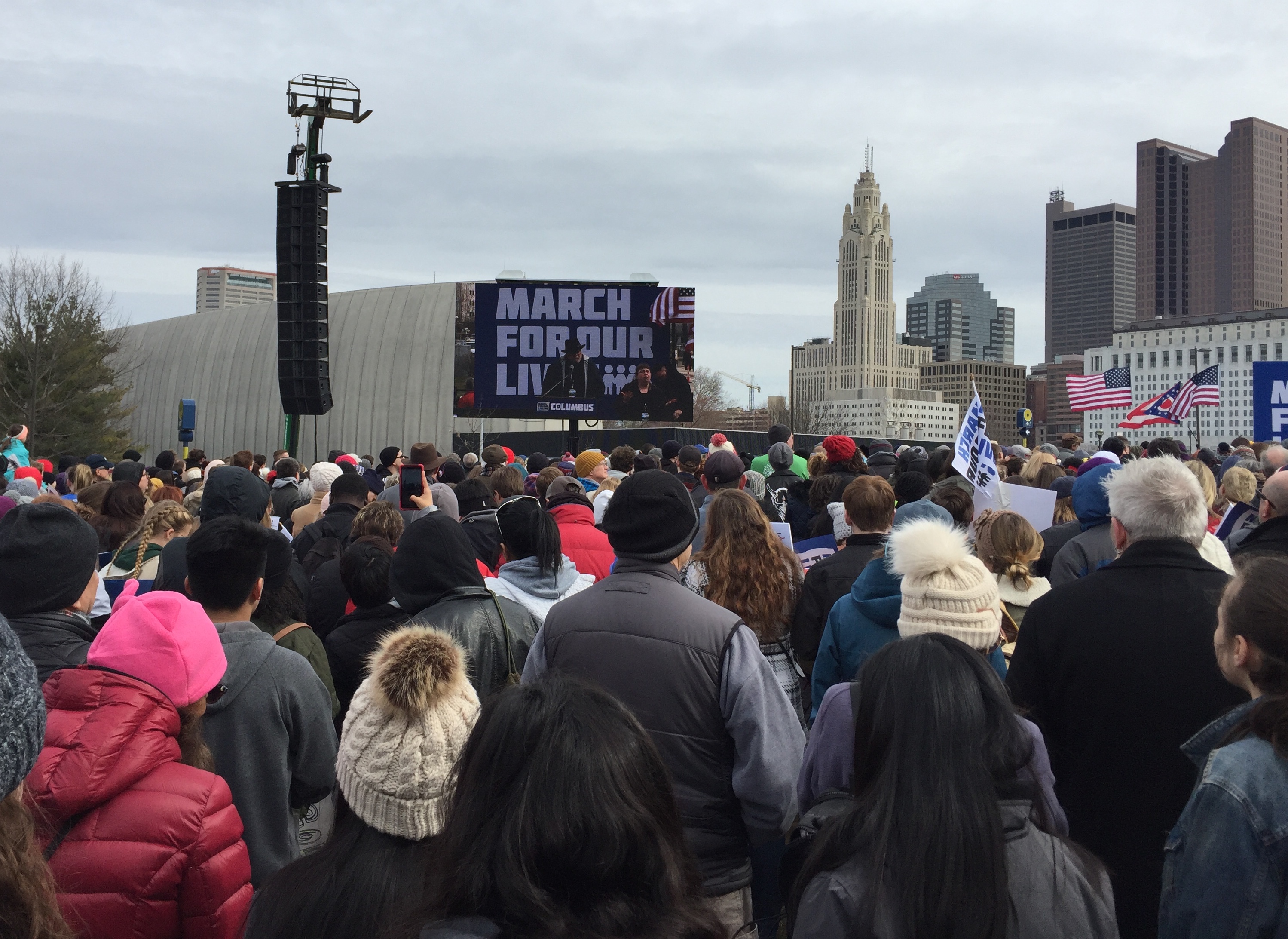 COLUMBUS, Ohio__Thousands of people turned out in Ohio’s capital Saturday to march for tighter gun restrictions, part of a nationwide rally set off by the school shooting in Parkland, Florida, last month.

Students, teachers, parents and concerned citizens held signs with phrases like “protect kids not guns,” “books not bullets” and “the NRA puts profits before people,” referring to the National Riffle Association. As they marched, they chanted for change and shouted “never again.”

The student-driven movement has highlighted the growing role youth are playing in demanding action to curb gun violence, with the organizers of the March for our Lives rally in Washington D.C. calling for a bill be brought before Congress to enact stricter gun-control laws.

Many of the youth at the Columbus march said they were there to speak out too.

“You’re tired of it all, after hearing it constantly … again and again about all this gun violence you’re like ‘no, my voice matters’,” said 16-year-old Avantae Gonzalez. Just two years away from voting age, he feels like he should be more political, he said.

Many people at his high school are pro-gun, he said, but he also believes there is a way to respect their beliefs while making his case for more gun restrictions.

“You have to co-exist, because if you’re constantly fighting you’re not going to get anywhere. Especially with something as serious as gun violence,” said Cheyenne Sullivan, 16, who held a sign that read “18th century laws can’t regulate a 21st century weapon. She wants people to understand that what motivates protests for stricter gun laws may be very personal.

“Someone actually lost a person or family member because of a gun and that’s why they want to get rid of it," she said. "I think that’s what you have to think about when other people are doing things like protesting."

They're hoping marches like the one Saturday will raise awareness and lead to a change in laws that make it harder for people to get their hands on guns.

Ohio governor John Kasich has advocated for some changes to the way background checks are done and a "red-flag" law that would allow judges to temporarily strip gun rights from people who show warning signs of violence. But he has stayed away from stricter measures such as raising age limits for gun purchases or banning assault-style weapons. Many Ohio lawmakers have also accepted campaign contributions from the NRA.

Nationally, the organization responded to the rally with a video calling the march part of a plan to strip Americans of their right to defend themselves. (A lone NRA supporter was shouted down from the statue in front of the Ohio Statehouse Saturday as he tried to record a message promoting gun ownership as a constitutional right.)

Fearing for their lives

The constant attacks on schools across the country have struck a chord with students who increasingly fear they could be next. Many schools now have lockdown drills and safety discussions in their classrooms. One student at Saturday’s rally in Columbus says teachers frequently reassure them they’re safe, but also tell them it’s okay to be afraid.

“I shouldn’t go to school and fear for my life,” said Chyna Mills, an eighth-grader who traveled to Columbus with her mom and aunt from their home near Cincinnati. Her school participated in the walkout and they’ve had some discussions around safety measures but Chyna said she worries they've avoided talking too much about the issue because they don’t want to give kids ideas.

“It’s scary to send my baby to school now,” said Chyna’s mother, Jennifer. She thinks guns are more prevalent than they were when her older daughters were in school, and she doesn’t like that it’s become the new normal. “I want to see her graduate from college, I don’t want to put her in a casket,” she said of Chyna.

In Columbus, speakers took to the podium before the march began to share stories of personal tragedy. Among them was Cathy Clark whose police officer husband was killed in 1998 during an undercover drug operation. She has since become a vocal advocate for gun restrictions.

“There are responsible gun owners in this country but there are also irresponsible people getting their hands on guns. This is a problem,” she said. “We all own this problem, we are all potential victims. This is absurd that our children are going to school and fearing for their lives. Get real.”

Amber Busser, a psychiatrist who held a sign that read “Guns Suck,” called the gun culture in the U.S. “ridiculous” and said she worries about guns in school even more now that her oldest son is in kindergarten.

"As psychiatrists we're not psychics and we cannot predict the future and it's very difficult to tell exactly who is going to be violent, but even if somebody seems really high-risk, there's nothing we can legally do to prevent these people from purchasing an AR-15 and going and shooting it. There's nothing in Ohio that allows us to do that. It just makes sense to reduce means to violence."

Some of the older people at the march talked about their own activism during the civil rights movement or the student protests against the Vietnam War. Teachers came out to support students, with some holding signs objecting to arming teachers. Beth Conway, a retired health education teacher, said its time to make up for years of in-action.

“These kids are right,” she said. I’m just ashamed that we’ve been asleep for 19 years.”

Much of the focus was on school safety, but people also came out to highlight gun violence generally and push for more stringent gun controls.

“I don’t think they’re necessary at all,” said Jack Davidson, a freshman at Ohio State University who pointed to lower crime rates in countries like Australia, where gun ownership is well below the United States.

Judy Abdulhafiz, 19, joined the rally with her father, Muhammed. Both are from Syria and fled because of the war. Despite all the violence in her home country, Judy said she was shocked by the reality that someone could just “lose it” and turn their weapon on another person. She hopes that at least access to assault-style weapons can be restricted.

While Davidson said he’s excited about the recent youth-led activism, he thinks it will take a long time for it to make a difference, in large part, he said, because youth still don’t have much political power. That still did stop him or many others from coming out and trying.

“I see our generation as moving forward and coming together,” said Sullivan. “I have a lot of faith in our generation, especially because we’re doing this now.”